Dudek was born 12th of April 2012. He was named after doctor Dolittle, a well known children's book character, where the doctor who is veterinarian can talk to animals. His nickname was Dudek after the Polish Liverpool goalkeeper Jerzy Dudek.

He came from a litter of four where the mother, Hello, was a very beautiful bitch and his father, Taczi was a highly awarded and very beautiful male. Dudeks siblings lived in Europe and in New Zealand.

He was our new and long waited male. We waited a long time for a puppy just after this combination, which is characterized by health, resilience and a good temperament.

In addition, Dudek have a super pedigree, his ancestors came from, among others Italy, France, Hungary and Poland. He already had a super temperament, a promising growth, robust body, beautiful head and he was always in good mood. Dudek was a charmer that goes straight into everyone's hearts.

He did also come from Kraina Zeusa and was our second dog from Olga and Artur. Thank to you for let us have him.

Dudek was participating in obedience training with Lise at DcH Kaløvig and in show training. 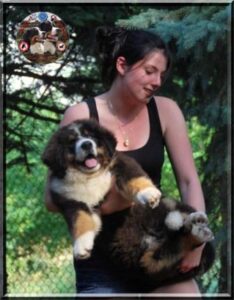